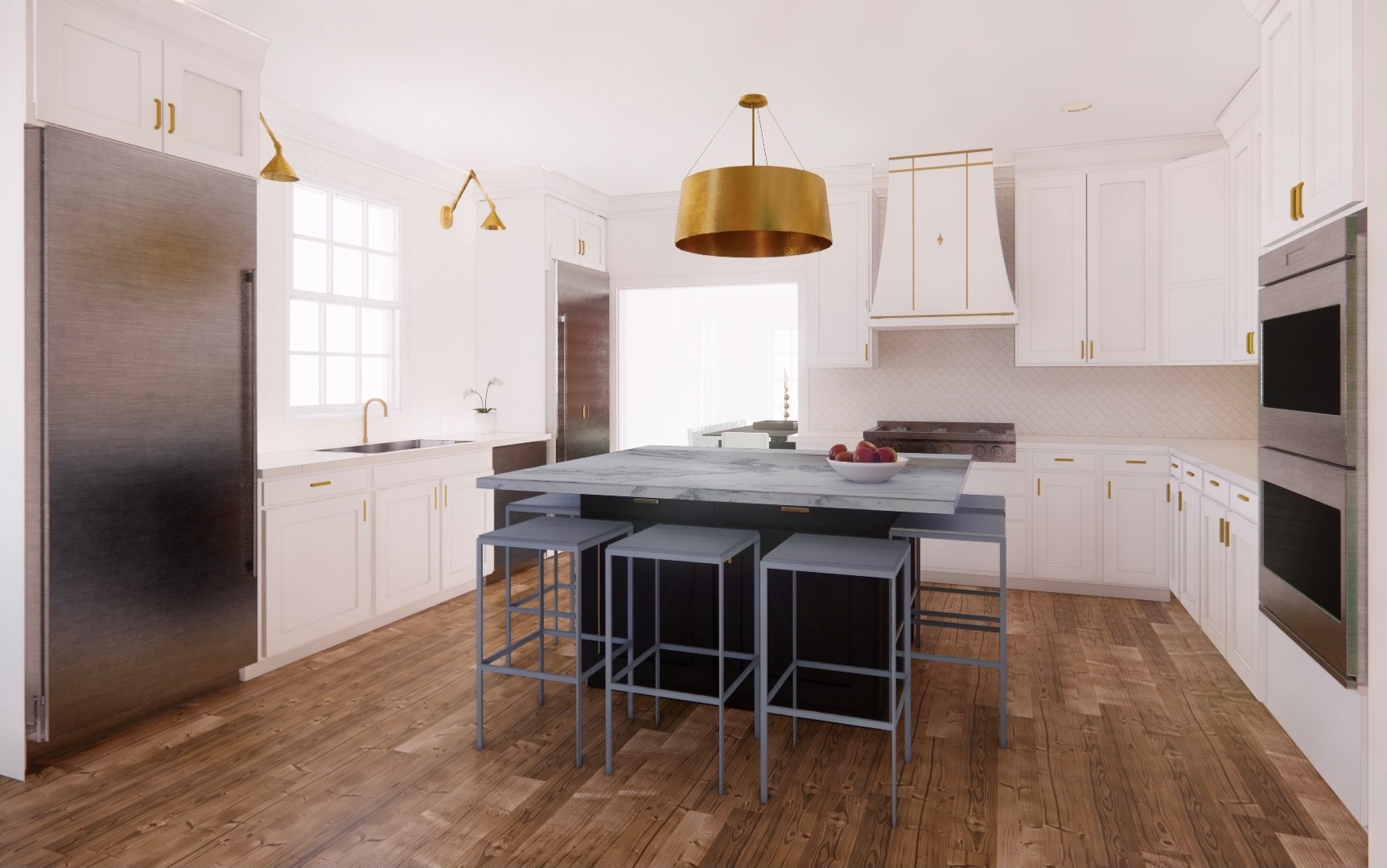 Architects + designers across the country love Alabama marble—find out why

This kitchen is gonna look sooooo good with a big slab of Alabama marble as the island. Rendering via Amanda Hickam of Harper Harris Design Studio

I don’t know about you, but I’ve been seeing Alabama marble my whole life without realizing it. Architects, designers and artists from across the country love incorporating this beautiful, strong, white marble from Sylacauga’s AM3 Stone into their work. We talked to two local architects to find out why.

Bham Now: What made you decide to use Alabama marble in the Servis1st Bank headquarters?

Ty Cole: Since Sylacauga’s just down the road, I was familiar with Alabama marble from many other projects, including a renovation of the Jefferson County Courthouse.

The design for this building is very straightforward with clean lines consistent with the bank’s corporate image. We used a lot of natural materials. Alabama white marble is long-lasting.

It’s a timeless and classical material that doesn’t go in and out of style. Alabama marble is some of the densest in the world and can be used like granite. This is why you see it in buildings across the world. Because it is so durable, you can also use it for counters and walls.

Bham Now: What do you love about Alabama marble?

Amanda Hickam: Alabama marble speaks for itself. AM3 Stone’s having their own quarry is huge—you can’t beat that in terms of quality control.

They have five different collections, each representing a different type of marble. You can customize the look based on your design intent with whatever species fits the bill. Each slab is full of character and different from every other one.

Depending on how you fabricate and design your project, you can make it into something modern or totally classic. It’s so versatile, you can’t go wrong using it.

Bham Now: What kind of hesitations do people have about it?

Why yes, that one looks perfect, thank you. Photo via Amanda Hickam of Harper Harris Design Studio

Amanda Hickam: A lot of people are afraid to use marble, especially in the kitchen. People are afraid it will stain or etch. But it doesn’t really stain unless you leave your red wine sitting on it for a while. Luckily, there are sealants that you can use to help protect the marble.

The beauty of this material is what happens to the marble over time. As you use it, it develops a patina that shows character over time.

Bham Now: What kinds of projects are you working on now using Alabama marble?

Some of the planning work that goes into redoing a home to incorporate Alabama marble. Image via Amanda Hickam of Harper Harris Design Studio

Amanda Hickam: Right now, I’m working on an installation in Homewood. We’re putting Alabama marble in the kitchen and three bathrooms. The kitchen island is the centerpiece of the house. They are really big into cooking and entertaining, so they’re putting in a chef’s kitchen.

The kitchen island is the centerpiece of the entire house. It’s made from one giant slab of Alabama marble, with dramatic veining and seating for people on three sides. It’s going to be stunning.

It was fun to go to the stoneyard and select the slab. You walk down the aisles of slabs and say “I’d like to see this one.” They bring their machinery over and pull a thousand-pound slab out for you to look at. It’s amazing when you see the slab being pulled up into the air.

When we picked the slab for the island, the client gasped “That’s the one!”

It’s an important decision when it’s such a prominent focal point of your home. In this case, it’s really going to be spectacular.

Bham Now: What other ways do you want to use it in the future?

Alabama marble takes everything up a notch in the kitchen. Photo via AM3 Stone

Amanda Hickam: I’m really dying to use marble on a backsplash. I’d love to do something very graphic.

There’s something called a “book match application” where the marble has a vein running through it and you slice it down the middle, then mirror it like you’re opening up a book. You end up with symmetrical halves and a line down the center. You can play up the veining, and it’s very graphic.

I have another project in the conceptual design phase where Alabama marble and basalt marble alternate in a harlequin checkerboard pattern. This is a more classic look, and really beautiful once it’s installed.

I also really like mixing in other materials and am imagining creating a tabletop out of marble tile with a wood inlay.

There is a ton you can do with this marble.